The information has been obtained from printed timetables and other local sources (like taking the bus) and is given in good faith.
Information correct as of 2nd April 2022

The stopping place for Rede Expressos, Mundial Turismo, Expresso Qualidade and other long distance services is the bus station in Rua da Abicada. This is 1.5km from the town centre. Services to and from Lisbon, Seville etc stop there. This bus station is also used by the 'Aerobus' to and from Faro and
Faro Airport via Lagoa and Albufeira.
Map here. Other relevant information is here
All regional buses stop in Avenida Guarané by the river. Most of the local Vai e Vem buses stop at Largo do Dique close by.

Portimão is linked with the rest of the Algarve by the inter-urban and long distance bus routes listed above.
The railway station is just to the north of the city centre, with trains along the Algarve route and connections with Lisbon via Tunes.
Long-distance buses (coaches to UK readers) run to Lisbon and more distant parts including Seville.

Below - Alameda square in Portimão

The city of Portimão and its suburbs are served by a network of mini-bus routes under the banner ‘Vai e Vem’. Service starts at 0700 and finishes between 1930 and 2000hrs. On December 24th service ends at around 1900hrs. In summer there are later buses between Portimão and Praia da Rocha but not elsewhere.

At weekends and public holidays some routes have very limited service, several have none at all. The mini-buses used for most journeys are grossly inadequate at busy periods (school start and finish times) so be prepared for overcrowding and even for a full-up bus sailing past your stop. The picture below is one of the minibuses used most of the time. They do have some larger buses used at busy times on some routes. 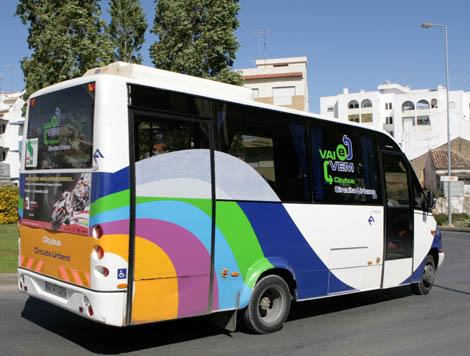 These buses do not go across the river to Ferragudo etc! There are maps and timetables at some  city centre bus stops, but many other stops have no information at all.

SUMMARY OF ROUTES AND LINKS TO TIMETABLES AND MAPS

THE OFFICIAL SYSTEM ROUTE MAP IS HERE. All stopping places are shown.

There is a useful interactive map at https://www.cm-portimao.pt/ptmapa/ click Vai e Vem and a route number to see the complete route and all the stops. When a route is shown, click a stop to see the times of the buses.

In Praia da Rocha, inbound buses stop at the Hotel Jupiter, Hotel Oriental and the Fortaleza. They return via a parallel street without stopping.

The route between Portimão city centre and Praia da Rocha has late evening service in July and August. It is numbered route 3N.This is now the only route operating after about 2000hrs.

In ALVOR all buses in all directions call at the bus stop at the large roundabout junction at the entrance to the village. At the time of my last visit no current timetables were on display. There is a local agent selling Vai e Vem bus passes called Papelaria d'el Rei nearby at Rua Marquês de Pombal, nº 3. Open every day.

CRUISE LINER SHUTTLE - the port of Portimão operates shuttle buses as required between the cruise dock and the city centre at Largo do Dique. The distance is about 1 mile / 1.6km, is flat and easily walkable.

The main routes of interest to visitors will be these.


You can download the official timetables and route diagram to your device from this page.

ON VAI E VEM BUSES SUMMER TIMES APPLY ONLY DURING JULY AND AUGUST. Make sure you are looking at the correct times.

At the time of my most recent visit, no current timetables were visible at the main Largo Do Dique bus stops nor at Alvor. Many bus stops do not indicate which bus stops there, some are still showing the numbers for routes discontinued 2 or 3 years ago!

The diagram below shows the main routes likely to be used by visitors.

Click the diagram to see it full size. There is no direct Vai e Vem service between Alvor and the eastern end of Praia da Rocha.

Route 13 is the quickest route between Portimão and Alvor, but does not run at weekends nor on public holidays. At weekends and holidays it is Route 1P that you need - see below.

Route 13 - City (Largo do Dique) - Tres Bicos - Bemposta - Hospital Particular - Alvor Roundabout every 25 minutes during peak hours, every 50 minutes mid-morning and mid-afternoon. This bus starts from a different stop at Largo do Dique than the other buses to Alvor - check the map or you might miss it like I nearly did! See Route 16 below for limited Saturday service along this route.

Route 35 Ladeira do Vau - Hospital - Cardosas - City (Largo do Dique) - Jardins da Rocha - Praia do Vau every 25 minutes for most of the day, every 40 minutes during the late morning and late afternoon. Runs on weekdays only

OTHER WEEKDAY ROUTES - these DO NOT RUN AT WEEKENDS OR ON PUBLIC HOLIDAYS.

Parque de Feiras e Expo* and Portimão Arena. The next stop on routes 31, 32 and 37 is at the 'new' bus station for long distance services.
The Cardosas stop is very near the Aqua Shopping centre.

THESE ROUTES RUN ON SATURDAYS, ROUTE 37 ALSO RUNS ON SUNDAYS AND HOLIDAYS

The current official fares leaflet can be downloaded here - available in Portuguese and English. Fares have not increased since 2013!

Cash fare is €1,50 for any single journey. A one day ticket (unlimited journeys) is €3,50. There is no discount for seniors or children except for residents. Children under 4 travel free.

Pre-paid single journey fare is 80 cents. 10 or 20 journeys can be loaded onto a rechargeable card, costing 3 Euros, which you can buy at the Largo do Dique bus office and other places around town, including in Alvor: Papelaria El Rei, Rua Marquês de Pombal, nº 3. This pre-pay system will save you money if you intend to use the buses more than about 6 times during your stay.

Monthly passes are available at €24.00. You need a photo. Enquire at the bus office. Children, senior citizens and those of reduced mobility who are residents can get half price passes, but you will need to provide proof of address etc. Tourists are not eligible for these discounts.

Vai e Vem tickets are not valid on VAMUS buses, nor vice-versa.

Portimão's old 'bus station' used by local and regional buses is an open air facility near the Largo de Dique, which is not far from the old bridge over the river and the main city centre shopping area.

ALL BUSES TO OTHER TOWNS AND VILLAGES LEAVE FROM THE AVENIDA GUANARÉ NEAR THE REPSOL GARAGE. MOST VAI E VEM LOCAL BUSES USE THE STOPS AT LARGO DO DIQUE. CLICK THE MAP BELOW FOR LARGER SIZE.

NB - bus stops are not lettered as per map - this is just for convenient indexing!

Check which stop your bus leaves from. Do not leave it to the last minute! (Personal experience was not a good one!). The bus stops are fairly clearly labelled as to the destinations served. There is no waiting room etc. There is small shop and café attached to the Repsol Garage (petrol station). Inbound local buses from Lagoa and Ferragudo don't turn immediately towards the Largo do Dique. They go along the Rua Infante de Henrique as shown, before embarking on a tour around the city. If it's the city centre shops you want, get off at the first stop after crossing the bridge.

ALL LONG DISTANCE BUS / COACH SERVICES NOW CALL AT THE 'NEW' BUS STATION 1.5km (nearly a mile) from the town centre. CLICK FOR MAP.  More information here. Local bus routes 31, 32 (weekdays) also 37 (weekends and holidays) stop at the new bus station. Other buses do not go there, leaving a very long walk between them!


Portimão railway station is a few minutes walk to the north of the city centre. Routes 31 and 32 stop there on weekdays, at weekends the 37.

Portimão has several retail parks and shopping centres around the edges of the city. Most of the buses mentioned below DO NOT run at weekends.


Aqua Shopping is served on weekdays by routes 31, 32, 34 and 36, at weekends by route 37. The Cardosas stop on other routes is within 3 minutes walk. It is 6 or 7 minutes walk from the railway station, 12 - 15 minutes from the main bus stops above. The Monchique to Portimão bus also stops at Cardosas.


Portimão Retail Centre and the nearby Vila Marché shopping centre are served by routes 31,32, 34, 36 and 37 as well the VAMUS bus number 80 from Lagos via Mexilhoeira Grande.

The Continente Portimão Cabeço do Mocho hypermarket in Rua das Papoilas is passed by route 21 and 36, also the same VAMUS bus to and from Lagos.

The Center Comercial Continente on Rua São Lourenço de Barrosa is served only by route 36.